Chapatti  is generally a South Asian bread made from stone ground whole meal flour, traditionally known as Atta flour.  Chapattis are one of the most common forms in which wheat, the staple of northern South Asia, is consumed.  Chapatti is a form of roti or rotta (bread). The words are often used interchangeably. While roti,rotta refers to any flat unleavened bread, chapati is a roti made of whole wheat flour and cooked on a tava (flat skillet). 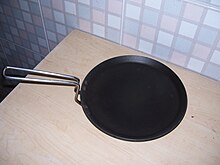 Often, the top of a chapatti is slathered with butter or ghee (clarified butter). A piece of chapatti is torn off and used to pick up the meat or vegetable dish(es) that make the meal. It is folded into a sort of loose cone and used as a scoop to eat the more liquid dishes at a meal..

Chapatti sizes (diameter and thickness) vary from region to region and kitchen to kitchen. . Chapattis made in domestic kitchens are usually not larger than 6-7 inches in diameter since the ‘tava’ on which they are made comes in sizes that fit comfortably on a domestic stove top.

Tavas were traditionally made of unglazed earthenware, but are now typically made from metal. There are also electric tavas manufactured in India. The shape of the rolling pin also varies from region to region. Some households simply use a kitchen work top as a sort of pastry board, but many homes have round flat-topped ‘boards’ specifically for rolling out chapattis that may be made of wood or stone.