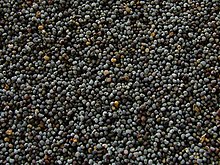 Poppy seed is a spice and an oil seed  from the opium poppy. The tiny kidney-shaped seeds have been harvested from dried seed pods by various civilizations for thousands of years.  The seeds are used whole or ground, as an ingredients in many foods and they are pressed to yield poppy seed oil.  Opium poppy is native to the Middle East and produces very small slate blue, brown, white or yellow seed that has a nutty flavor and have a crunchy texture.

In Indian cuisine, white poppy seeds are added for thickness, texture and also give added flavor to the recipe.  It is also used as a garnish to the sweet dishes.

The millets are a group of small-seeded species of cereal crops or grains, widely grown around the world for food and fodder.

The most popular staple amongst millets is the pearl millet and finger millet.  India is the world’s largest producer of millets.

Finger Millet in a Field 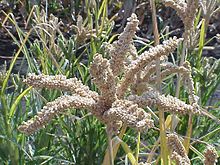 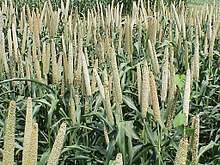 Millets are major food sources in arid and semiarid regions of the world, and feature in the traditional cuisine of many others. In western India millet is known as  jowar,or  bajro. Bajro has been used in India for many years to make the local staple called rotla.  Rotla is hand rolled, (without a rolling pin) flat bread.

Millets are also used as bird and animal feed, and for brewing beer. It is used as a porridge too.

Millet contains no gluten, so they are not suitable for raised bread.but  are appropriate foods for those with celiac disease or other forms of allergies/intolerance of wheat.